skip to main | skip to sidebar

I didn't quite meet my, in retrospect, insanely aggressive New Years Resolution '06. (At least not without resorting to Enron style accounting.) It was still worth it, and will be revised for this year, though reduced by 50% to account for my increased work hours. So, 2.5 books a month = 30 books in '07. I already have 3 down, so I'm ahead of the curve. But, been there done that, so I need a new one.

Obviously, passing the AK bar is a priority as well, but that's for, like, work, so it doesn't count either. Plus, I've done it once, what could possibly go wrong?

Which brings me to the actual resolution. With due respect to Lauren's concern (hey, I've been a gym regular since August, so I don't count as one of those pikers. I note that the herd is thinning already,) being careful to avoid tragic mistakes and being cognizant of the generally pernicious effect of using weight as a proxy for health, I still have a resolution regarding weight loss.

Thankfully, it's both modest, and, I think, obtainable. I'm down to about 215 now (from a very mirthful* 230 or so, circa the wedding) I'd like to be under 200 by MARS, and down to around my 'playing weight' (was about 180 in college, but would be more like 190 now given that my upper legs and hips were skinny and not at all powerful back then) by the end of the year.

Labels: All Work And No Play Makes Pooh A Dull Boy, Bookblogging, I Love Me

Tuesday Thoughts on Tribe, Tony Campbell and My Fuddiness

RIA's kid seems as puzzled by the appeal of HRC's candidacy as I am. (Scroll to the bottom)

And for no reason at all, Tyge! 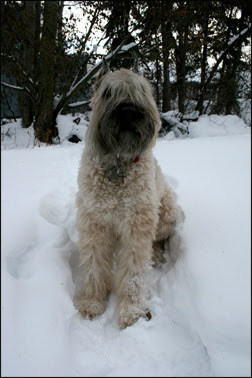 Linking is not thinking. But then, I'm a doer not a thinker. I create my own reality...

A while back, Ezra took a skillsaw to the West Wing for portraying politics as "a realm of comity, decency, respectable opponents, and honorable intellectual warfare" despite the manifestly counter-factual nature of this vision. Despite my undying love for The Wing, Ezra is almost certainly correct. That doesn't mean that we shouldn't aspire to a more high-minded version, though. I imagine that Hagel and I would agree on virtually nothing, and he would mince few words in denigrating my positions. But on this evidence he'd engage in the discussion rather than attempting to preempt it with ad hominem up ad hominem.


Which reminds me that I need to say nice things about Jack McCallum's new book about the '05-'06 Suns. Great read, with a lot of inside baseball (basketball...) which you simply don't get in most accounts. A fascinating look at the internal psychology of a professional sports team.
That's all, we'll try harder next time.
Posted by Pooh at 5:47 PM No comments:

Is there a law of thermodynamics which requires that the level of crazy in Congress remains constant?

Dikembe Mutombo grew up in Africa, amid great poverty and disease. He came to Georgetown University on a scholarship to study medicine — but Coach John Thompson got a look at Dikembe and had a different idea. Dikembe became a star in the NBA, and a citizen of the United States. But he never forgot the land of his birth — or the duty to share his blessings with others. He has built a brand new hospital in his hometown. A friend has said of this good-hearted man: “Mutombo believes that God has given him this opportunity to do great things.” And we are proud to call this son of the Congo our fellow American.

Possibly the greatest contribution to the game by Dikembe Mutombo may be the phrase, "Who wants to sex Mutombo?" To quote The Mighty MJD, "Dikembe walked into a Georgetown bar one night [in the early '90s], the entire place stopped to look at him, and in response, Mutombo just yelled out, "WHO WANTS TO SEX MUTOMBO?!"

so for the second time today, If You Don't Know, Now You Know.)

The Part I Agreed With (SOTU part deux) 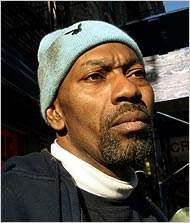 Three weeks ago, Wesley Autrey was waiting at a Harlem subway station with his two little girls, when he saw a man fall into the path of a train. With seconds to act, Wesley jumped onto the tracks … pulled the man into a space between the rails … and held him as the train passed right above their heads. He insists he’s not a hero. Wesley says: “We got guys and girls overseas dying for us to have our freedoms. We got to show each other some love.” There is something wonderful about a country that produces a brave and humble man like Wesley Autrey.

Mr. Autrey was waiting for the downtown local at 137th Street and Broadway in Manhattan around 12:45 p.m. He was taking his two daughters, Syshe, 4, and Shuqui, 6, home before work.

Nearby, a man collapsed, his body convulsing. Mr. Autrey and two women rushed to help, he said. The man, Cameron Hollopeter, 20, managed to get up, but then stumbled to the platform edge and fell to the tracks, between the two rails.

The headlights of the No. 1 train appeared. “I had to make a split decision,” Mr. Autrey said.

So he made one, and leapt.

Mr. Autrey lay on Mr. Hollopeter, his heart pounding, pressing him down in a space roughly a foot deep. The train’s brakes screeched, but it could not stop in time.

Five cars rolled overhead before the train stopped, the cars passing inches from his head, smudging his blue knit cap with grease. Mr. Autrey heard onlookers’ screams. “We’re O.K. down here,” he yelled, “but I’ve got two daughters up there. Let them know their father’s O.K.” He heard cries of wonder, and applause.

When he asks "and what did dad get?"


There is only one acceptable answer as far as I see it: "Sheeeeeeeeeeeeeit"

If You Don't Know, Now You Know

Occasionally one runs across a word which, even taken in context, one is unable to really figure out what it means. For the last two months or so, my dictional bugaboo has been "soi-disant." It doesn't help than one of the chief employers of this word is a notoriously bad speller/proofreader when blogging, but I've never figured out what it meant other than that it was pejorative. Well, being a good soi-disant blogger, I looked it up:

Just a soi-disant public service from me, to you.

(And if you catch me actually using this word more than once a month, you have full permission to call me a pretentious wanker. Not that Yglesias is that - his blogbag includes much more erudition than you pay me for, and with that you get eggroll $10 words.)
Posted by Pooh at 3:34 PM 2 comments:

Just to Sum Up

I should have known it wouldn't end well after getting up too damn early for this gut-punch. Then Tyge snarfs the fresh pumpkin bread (leaving little pumpkin boogers in his beard for moster of the day, and then...ugh and ugh...

Called It (Part the Reverse)

Immediately after poor interference call on NE (don't you have to touch the receiver for it to be interference?*), Steph (who is inexplicably rooting for the Colts. This might not work out, pops...) says "well, you guys will win it anyway."

Anyone with any experience with her skills of prestidigitation knows that one could safely shut the TV off. So it always was, so it shall always be.

This leaves me in a positiong similar to last year's NCAA hoops final, where I'm forced to pick between the lesser of two massively annoying teams.

I won't be booing, I'll be yelling "Moooo-vers"

Quoth the Geezeman: "You know, Asanti Samuel has turned himself into a heck of a cornerback."

Congrats Chicago Bears. I guess. The Extreme Large Fruit Vessel XLI will be much less interesting with them instead of the Saints, both in terms of the actual game, and the stories leading up to it. I admit to a certain degree of fatigue about hearing about the wonderfulness of the Saints' players and how they Rebuilt that City on Rock and Roll (note that Joe Buck gave Reggie Bush a completely free pass on his outrageous taunt-front flip-and-dance routine on his TD. I have no problem with any of that, but imagine Buck's reaction if it had been, say, The Randy Moss doing those things...), but the Saints are also a more interesting Football qua Football team, I think.

In any event, all that is merely a long-winded windup (like I do), for me noting that Sean Payton made a huge tactical error that likely cost them the game, and I called it at the time. Consider, Uncle Mo has been standing on the Saints sideline since before half-time, Rex Grossman was making Eli Manning look composed, and the field conditions were miserable. Why the hell would you kick a 48 yard FG? Just pin them inside the 20, stop them again, and so on. As it was, Figgie predicitably missed (is it ever a good sign when your kickoff guy comes on to try a long FG instead of the regular kicker. Does this ever work out well?) Saints get the ball inside the 5. They panic, take a safety, and the only time the Bears look in trouble from then on was when Rex almost got picked by Uncle Mo switching sidelines in the middle of the next drive.

And all of this was so obvious at the time, I was expecting Simba's assistant coach for common sense to stop the madness, but it never happened.

Labels: Footblogging, I Love Me, Sports

My love for Free Darko is no secret. Whether taking a blowtorch to a particular statistical snake-oil sales man, preemptively squashing any attempt to rehab Isiah Thomas or simply linking to the greatest piece on basketball 'style' that I've ever read, it's always enlightening and entertaining.

Sometimes, however, it simply defies rational description. Consider the pictorial coda to today's query on whither Lebron:

(As an aside, as I asked Tall via email, am I crazy for beginning to question Lebron's drive, for lack of a better word? At what point does he enter the Kournikova/Hilton zone of someone who is famous for being rich & famous rather than successful?)
Posted by Pooh at 3:08 PM No comments:

I have interesting stuff to say. No really. Why don't we all assume I've been exceptionally witty for the past few weeks, that way I have some momentum going for when I actually start posting with regularity again.

As an aside, and a recommendation I feel needs to be passed along, see The Prestige if you get the chance. It is all kinds of awesome.
Posted by Pooh at 7:54 PM 2 comments:

Labels: I Love Me

More than a foot and a half of snow yesterday in the 'Burg. And our flagship (and only...and only semi-) pro sports team still played.